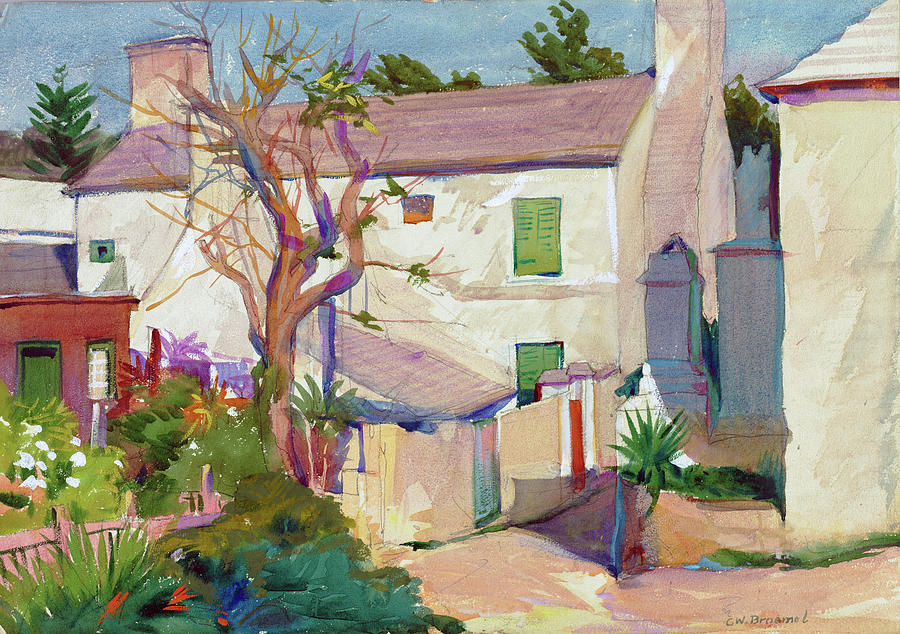 Pictured here is a watercolor painting by Carl William Broemel in 1924. A quaint village with buildings, alleyways and succulent plants. Colors have been modified to create more of a vibrant, tropical feel. St. George appears to be an island off the coast of Florida, but other than that, I'm not sure where this would be.

ROEMEL, CARL WILLIAM (5 Sept. 1891-23 May 1984) was noted as a watercolorist associated with the Cleveland School of artists. The son of Anna (Vlasteck) and Fred Charles Broemel, an architectural sculptor, Carl was born in Cleveland's old German district around Scovill and East 22nd St. He became the youngest student in the Cleveland School of Art (see CLEVELAND INSTITUTE OF ART), where he studied decorative design and graduated in 1909. After further study in Europe and New York, he returned to Cleveland and established a commercial art studio in the Hanna Bldg. Broemel exhibited watercolors and oils annually in the MAY SHOW from 1923-40. His watercolors were also shown locally in such venues as the WEBB C. BALL CO. and the KORNER & WOOD bookstore. In Oct. 1935 Broemel became the first supervisor of the WPA Federal Art Project's District 4 in Cleveland. Prior to his resignation in Feb. 1937, he instituted a "guild system" for his unit in which artists of varying degrees of training and accomplishment worked together in a single studio to produce art works in a cooperative manner. He then served as a regional art juror for the 1939 New York World's Fair and the following year opened a studio in New York. Moving to Sharon, Conn., he exhibited in such places as the Albany Institute of History and Art and also served as a staff artist for the U.S. Air Force. With his wife, Ruth, Broemel had 3 children: Phyllis, Carl Broemel, Jr., and Charlotte. Broemel, a past president of the CLEVELAND SOCIETY OF ARTISTS and the New York Artists Guild, had moved to Daytona Beach, Fla., shortly before his death.